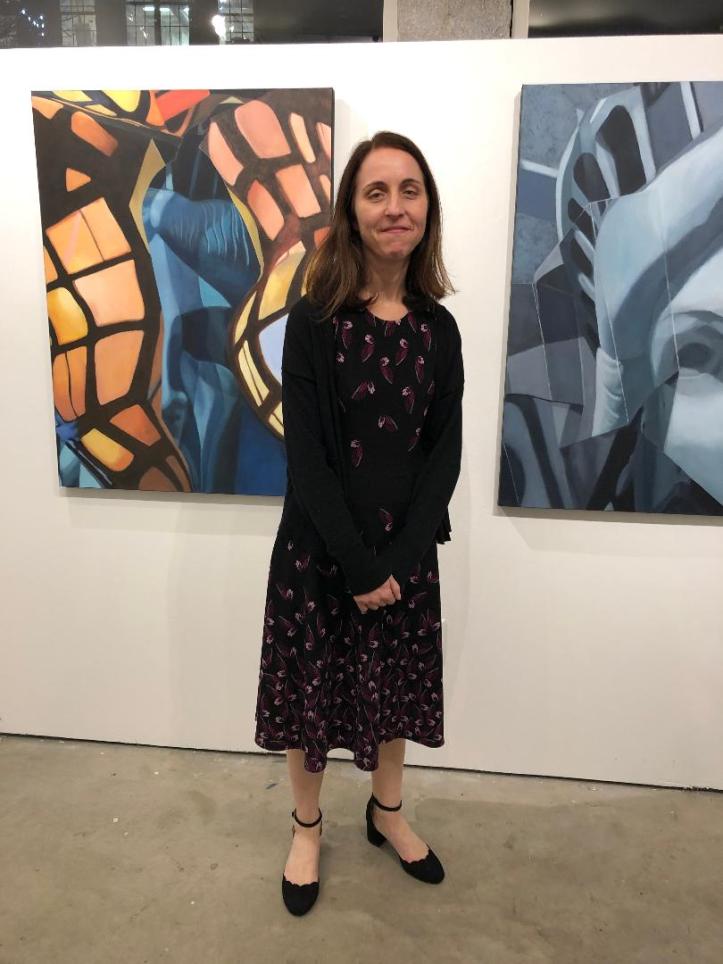 Tectonics: the process that controls the structure and properties of the Earth’s crust and its evolution through time.

Tectonics: an apt name for Diana Zipeto’s first show at Galatea Fine Art. Her paintings embody the concepts of disruption and resilience and illuminate the power of transformational change.

Zipeto’s work lies at the intersection of design and painting, a reflection of her training as a graphic designer and illustrator. Her paintings defy easy classification; she notes her work has been called “abstract,” “Cubist,” and “fractured”. However you categorize it, Zipeto’s paintings are fresh, thought-provoking, and visually intriguing. 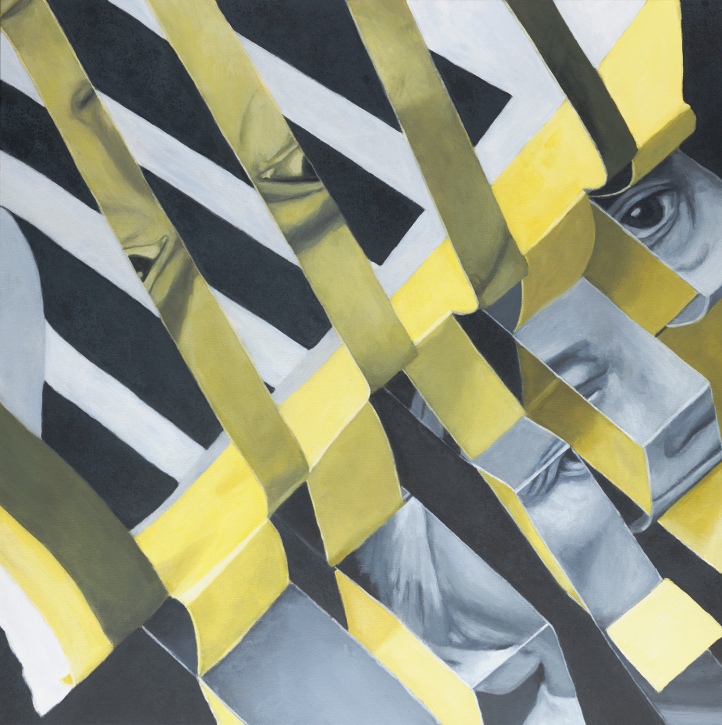 The Liberty series, inspired by a visit to New York City in 2014, comprises stylized paintings of the Statue of Liberty’s head.

To fully appreciate the paintings in this exhibition, it’s necessary to understand Diana’s complex methodology by which she transforms her images from two dimensions to three and back to two using a wide range of materials, techniques, and processes. Each final painting encodes in its creation the history of art, requiring nine separate steps and covering the gamut from pencil and paper sketches to digital manipulation of photographs. 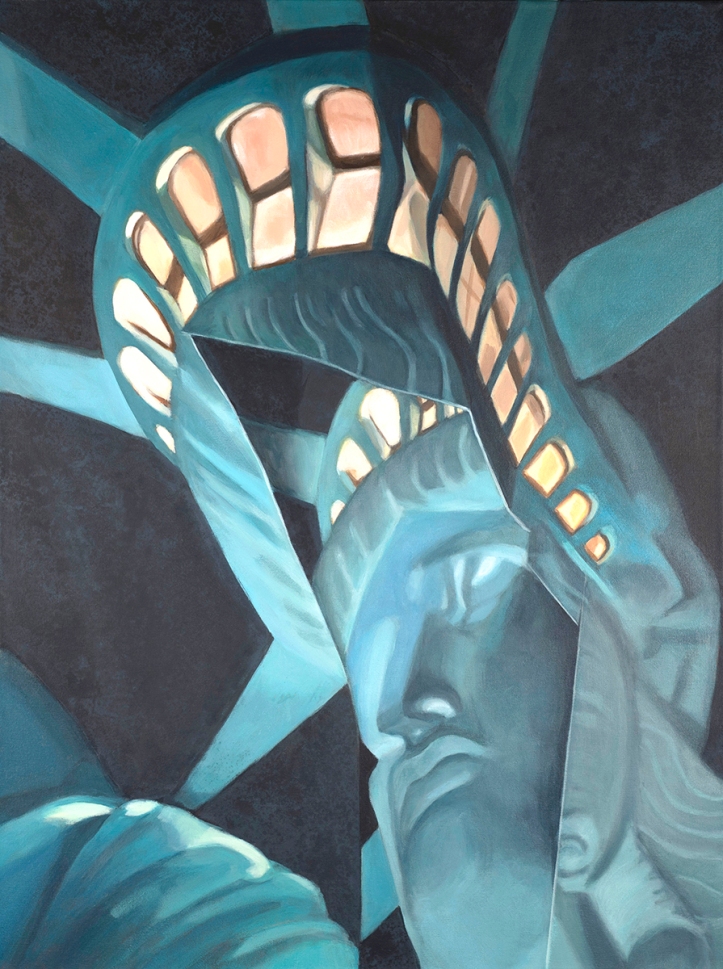 She begins by collecting royalty- or rights-free photographs of her subject. She then uses origami (folding paper) or kirigami (folding and cutting paper) to create three-dimensional models, typically 6 to 8 inches wide, of the subject. Next, she photographs the models from various angles and uses Photoshop to crop the image and adjust contrast and color. She then uses the resulting photos as a reference to create a black and white sketch that’s proportional to her final canvas size. The sketch, in its turn, becomes the basis for a small painting she produces to get a feel for the composition and colors. Finally, when she’s comfortable with the small piece, she grids her full-sized canvas, transfers the drawing, and creates the final painting.

“The expressive part is when I’m working with the paper, the model building,” Zipeto explains. “Painting is the execution. It’s also a technical challenge, taking something small and fragile and making it big and permanent.” In this way, Zipeto’s paintings effect a transformation, not just in scale, but in giving the paper models a personality and creating a narrative.

Nowhere is this more evident than in the way Zipeto renders the eyes in her paintings. “It’s impossible to paint eyes without imbuing them with some kind of intensity,” she says. With all the chaos going in the Kirigami paintings, for example, the eyes are constants that bring order to each painting and unity to the series. 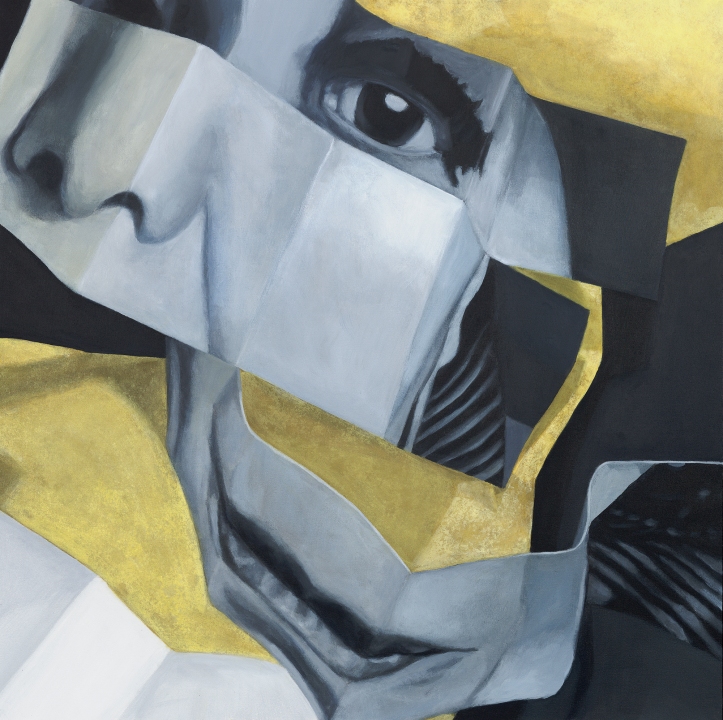 For Zipeto, raised in the 1980s, liberty and gender equality seemed inevitable and always advancing. Her paintings question that inevitability and examine the uncertainties and possibilities women now encounter at the beginning of this new millennium.

The artists in her Kirigami series began as strong, whole people in the photographs she used to construct her three-dimensional models. But in the final paintings, these same women are prisoners of the geometric and abstract forms; the viewer only sees slivers of their visages and is left guessing what their whole personas might be.

The same tension plays out in Zipeto’s Liberty paintings. Although the face of the statue is less obscured than the faces in the Kirigami series, we still only see a fractionated and distorted view, a reminder that liberty and equality may founder on the optics of the viewer. 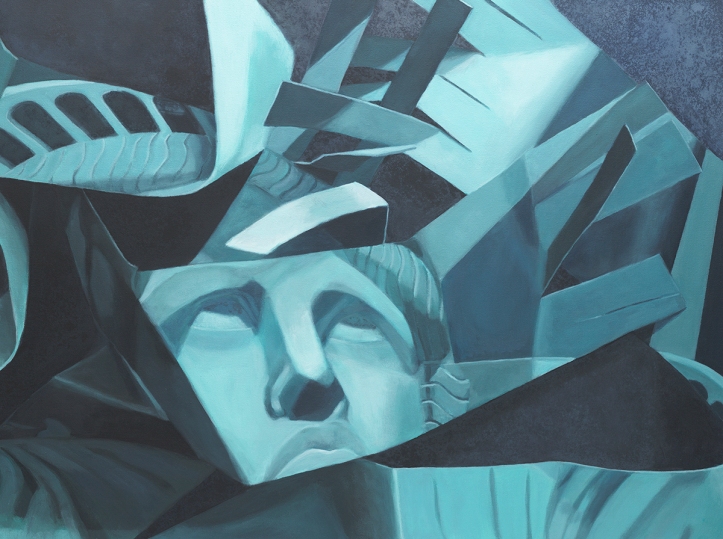 Each piece in Tectonics stands alone as a subtle, striking work of art. Taken as a whole, the show is a tribute to Zipeto’s ability to blend technique and vision into a powerful commentary on our time.